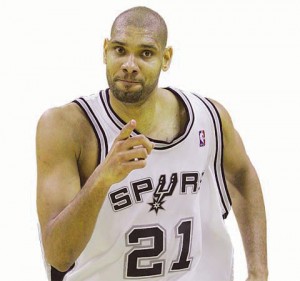 Tim Duncan, originally Timothy Theodore Duncan, is an American professional basketball player widely recognized for playing for the San Antonio Spurs since the start of his NBA career. He was born on April 25, 1976 in St. Croix, U.S. Virgin Islands. He grew up with the love for swimming. He even became a top U.S. competitor in the 400-meter freestyle during his younger years. By some unfortunate circumstance brought by Hurricane Hugo, he quit swimming and decided to focus more on basketball when he was in high school. In 1993, he enrolled at Wake Forest University in Winston-Salem, North Carolina, attaining a degree in psychology. It was in the year 1997 when he was drafted first pick by the San Antonio Spurs and eventually started his career in the NBA. During his years in the San Antonio Spurs, he has led his team to series of championships. He is also labeled as one of the best power forwards in the NBA history.

It’s no longer surprising why Timmy possesses an incredibly fit body. While he plays basketball almost everyday, he’s also conscious when it comes to his diet. He was once asked by the NBA Hoop as of how he maintains a healthy body and according to him, “I just changed my diet a bit. For a long time, my metabolism was real high and I could eat whatever I wanted to. I just got to the point where I knew I couldn’t do that. I cut back on my sugars and my sodas and my bread and just little things that change your diet.”

It was rumored that he’s practicing a Paleo diet, but he denied it. He said, “Huh? No, not Paleo because I didn’t cut it out. I don’t got to cut anything out. I’m not that disciplined to cut everything out. But there are certain things I can do–not eating late at night, eating the right things for breakfast– just little changes like that. I just wanted to get my weight down, so it’ll take a lot of load off my knees, more than anything else. And then it just turned into something else, where I just felt really good, and felt really good at a certain weight and just trying to kind of keep it there.”