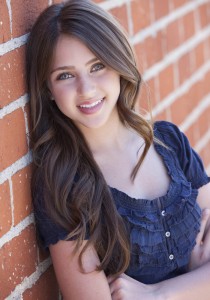 American teen actress, model, and singer Ryan Newman was born on April 24, 1998 in Manhattan Beach, California. She is best known for her role Ginger Falcone in the American Disney XD sitcom Zeke and Luther. Since she was a child, she already had a dream to become an actress. Her interest to acting made her become noticeable to the casting directors, leading her to portray roles in various print ads in television. At the age of seven, she started to appear on big screen, playing the role Eliza in Monster House and Cindy Collins in Zoom. In 2008, she played the role of the young Miley Stewart in the musical comedy series Hannah Montana. She also had a regular role in Zeke & Luther as well as in Good Luck Charlie. Presently, she is seen in the American sitcom TV series See Dad Run and is portraying the main role Emily.

To stay fit and healthy, she resorts to dancing. She usually dances everyday, and she considers this kind of routine her main fitness regimen. Apart from dancing, she is also a big fan of sports. She plays tennis, regularly swims, does bike riding, trampoline jumping, and even skateboarding.

She’s not that keen and strict when it comes to her diet. She just makes it sure that she’s not overindulging.