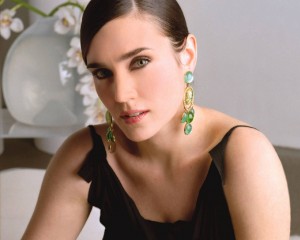 Jennifer Lynn Connelly was born on December 12, 1970 in Cairo, New York, in the Catskill Mountains.  Before she became a successful actress, she started her career as a model, where she appeared in different magazines, newspapers, and television advertising.  In 1984, she had her film debut in “Once Upon a Time in America”, where she portrayed the role of Young Deborah Gelly.  She continued her acting career and her outstanding performances in “Requiem for a Dream” (2000), “A Beautiful Mind” (2001), “Hulk” (2003), and “House of Sand and Fog” (2003), made her win and received tons of nominations for various awards.  She also starred as Virginia Gamely in 2014 “Winter’s Tale”; Naameh in “Noah”; and Nana Kunning in “Aloft”.

Jennifer became the Amnesty International Ambassador for Human Rights Education on November 14, 2005, where she highlights the global need for clean water.  She was also became the ambassador for Save the Children fund, emphasizing children’s rights, not just in the United States, but also, worldwide.  She was also considered as one of the most beautiful women in the word by Vanity Fair, Esquire, and Los Angeles Times.

To maintain her size-zero physique, she runs six to ten miles at a time and does her exercises regularly.  She said, “Running is my favorite workout. I tried doing jumping lunges for a while. That was dreadful.”

She also focuses on consuming a balanced diet to stay healthy, usually including whole foods such as vegetables, beans, grains, fish, nuts, fruit.  Above all, she emphasizes on her belief that happiness is more important than being concerned about the wrinkles.