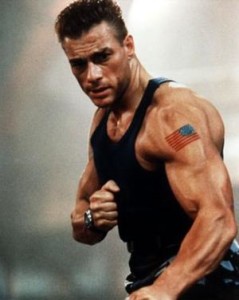 Jean-Claude Camille François Van Varenberg, professionally known as Jean-Claude Van Damme and abbreviated as JCVD, is a Belgian martial artist, actor, and director. He was born on October 18, 1960 in Sint-Agatha-Berchem, Belgium. He became known when he started to appear on certain action films. These films include films include Bloodsport in 1988, Kickboxer in 1989, Universal Soldier in 1992, Hard Target in 1993, Street Fighter in 1994, Timecop in 1994, Sudden Death in 1995, JCVD in 2008, and The Expendables 2 in 2012.

It’s no longer surprising to find out how seriously involved Jean-Claude in fitness is. In one of his interviews, he said, “I like to train to the fullest. I cannot do less than the most. I need my good sweat.” Apparently one with a superordinaire, ripped physique, this man is known to be performing different types of exercises. Some of these are exercises such as Barbell bench press, Barbell Incline Bench Press, Dumbbell flyes, Parallel bar dips, and many others.

As for his diet, Jean-Claude mainly consumes foods such as rice, bread, vegetables, and beans. This man knows exactly what to do to come up with a fitter, leaner body!