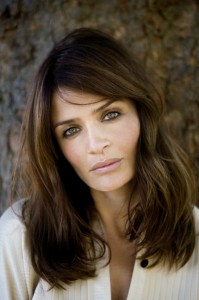 Danish fashion model and photographer Helena Christensen was born on December 25, 1968 in Copenhagen, Denmark. This stunning celebrity is known to be of Peruvian and Danish descent. Appearing in a number of magazine covers like Elle, Vogue, and Harper’s Bazaar, she also became a modeling sensation when she appeared in various fashion shows and ads for designers Chanel, Hermes, Prada, Revlon, Lanvin, Sonia Rykiel, Karl Lagerfeld, Versace, and Valentino. Prior to becoming a model, she used to compete in beauty competitions. In 1986, she bagged the Miss Denmark title and proceeded on the prestigious Miss Universe pageant where she represented her country. Not fully concentrating on modeling, she dreamed of building a business empire as she became the creative director of Nylon magazine in the year 1999 and eventually built the Christensen & Sigersen fashion line, a business she partnered with her friend Leif Sigersen. Helena is also not just a celebrity that appears on the limelight, displaying her beautiful image. She’s also a woman with great concern for cancer patients. She is known to be a part of the Fashion Targets Breast Cancer campaign, a movement that basically supports people with cancer by selling exclusive designer t-shirts as a fundraising act.

To keep up her modelesque figure, Helena resorts to daily exercises like swimming, walking, boxing and Yoga. She is also known to be training with her personal boxing trainer Jason Lee for about two years already.

For her diet, she said she’s not into strict diet but rather, she practices portion control.