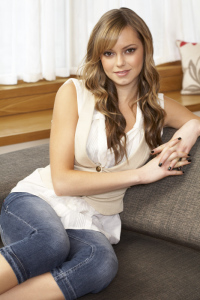 English actress Hannah Marie Tointon was born on December 28, 1987 in Southend-on-Sea, Essex, England to parents Ken and Carol. She first appeared on screen in 2003 when she was cast on the TV series Star and played the role Billie. Her breakthrough easily arrived as it came just the same year when she started her career. She became prominent for her role Tamsin on the TV series Kerching!. From 2005 t0 2006, she was highlighted on TV series Dream Team. She also took part on the TV series Hollyoaks, playing the role Katy Fox from 2007 to 2008. She had other appearances on screen afterwards including on TV series The Inbetweeners, The Midnight Beast, The Hour, Switch, and many others.

Now, how does the actress stay in good shape? According to her when she was interviewed by the Daily Mail UK, “I’m lucky that my weight doesn’t really change– I’m a size 8 whether I work out or not. I go through phases of hitting the gym two or three times a week, but at the moment I’m not going at all. I prefer doing exercise that’s fun, like trampolining or swimming.”

What about her diet? “As for diet, I eat healthily and avoid meat and junk food. I’ve never been on a proper diet,” Hannah said.