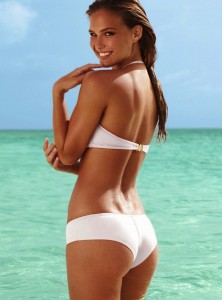 Bar Refaeli is an Israeli fashion model born on the 4th of June, 1985 in Hod HaSharon, Israel. A daughter of a renowned model, Bar instantly followed her mother’s footsteps since she was born. While she has grown up to be regarded as a famous celebrity in Israel, she was able to get the attention of international fashion fanatics, which made her become the first supermodel in Israel to make it to the United States’ prestigious runways. In 2007, she appeared in ELLE, Maxim, and GQ. She was also famed for her appearance in the Sports Illustrated magazine for swimsuit edition. Apart from that. Bar also became the face of prominent brands such as Garnier, Gap, Subaru, Samsung, Hurley, Andrew Marc, True Religion, Accessorize, Passionate, Fox, and others. In 2011, she became one of the judges for Germany’s Next Topmodel which was hosted by Heidi Klum. And just recently, she starred in the crime-caper film Kidon.

The stunning model’s amazing figure is a result of her hard work. According to Bar, she depends on Krav Maga. It’s a form of martial arts originated in Israel. It involves wrestling, striking, and grappling techniques. Apart from its self-defense purposes, Krav Maga is also a great form of workout.

When asked about her diet, Bar said that she’s not practicing any special type of it. “I don’t diet,” said Bar. “And I don’t have an eating plan, but I like to eat healthily. I don’t deny myself anything and there’s nothing I wouldn’t eat. I like desserts. I like food full-stop, but I exercise and I’m young, so everything keeps in check.”